Today we were planning to go to the Sayers Common car boot sale, which doesn’t open for buyers until 10am.

By some miraculous accident we were ready to go long before that, so we decided that rather than killing an hour we’d go to Pease Pottage instead.

It seemed busier than last time and we had to park in the second to last row of cars, which  came in handy when it was time to go!

I’ve been looking for a brace for a while, but I’ve been put off by the chucks most of the ones I’ve seen, which only seem to have two semi-circular jaws.

I’m not sure whether this is a Franken-brace, but it has a 3 jaw chuck which will require a chuck key.

The chuck is mounted in a square taper and fixed by a small bolt with a hex socket in one end:

The handle seems to be two pieces held together with nails: 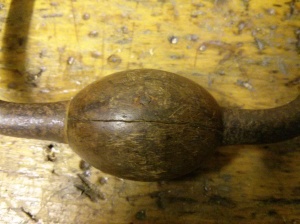 My next find was a heavy one which necessitated a trip back to the car:

I have no need for such a thing, but I was interested by it and felt I’d like to clean it up and see if I can get the chuck unfrozen (it seems to be stuck in the fully closed position).

The only obvious marking is a “British Made” sticker on the red gear.

Cranking the handle seems to just turn the chuck for a while, then something happens and the chuck is propelled towards the table by a thread at the top of the drill: 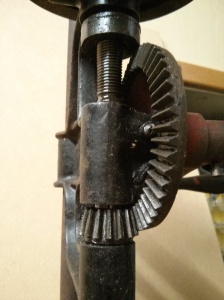 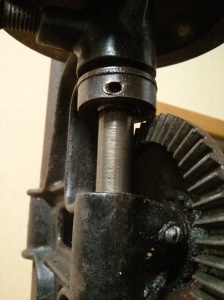 I’m not sure whether this is meant to happen, so I’ll have to do a bit of Googling …

The table has a small “smile of shame”: 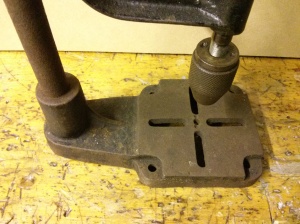 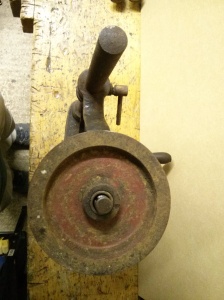 I’ve taken the chuck off and it looks like there is a screw loose inside it which may be intended to lock it to the end of the threaded rod.

Despite it not working I think this is my favourite find of the day.

I’ve been looking for any information on what make it is and how it works, but all I’ve turned up so far is this one on eBay for £40

If anyone knows the make and model, or has any information on servicing the drill then please get in touch!

Edit 05/05/2013: I found this post by Bugbear on UKWorkshop, which explains how the advance mechanism works.

My next find was three screwdrivers, one of which is quite badly bent

The medium sized one is a Marples cross ground: 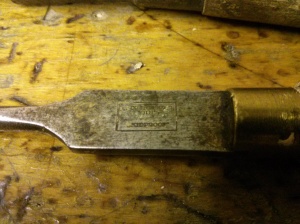 I’ll straighten the bent one and may turn the smaller one into an awl.

Next up was arguably my best value purchase – 6 items for a pound!

The screwdriver is another Marples crossground – a bit rusty and in need of a regrind:

The awl is square section and has a marking on the handle which I think may be Marples:

Both chisels have seen better days and could do with new handles.

The first is marked:

It desperately needs a new handle:

The other is 1″ wide and marked: 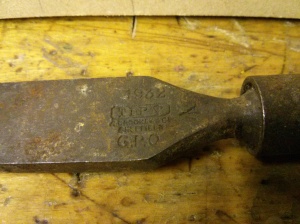 I seem to be amassing a small collection of ex-G.P.O. tools and my collector gene is twitching!

Also in this lot is a nail puller and something I think may be a screwdriver for split nuts on saws: 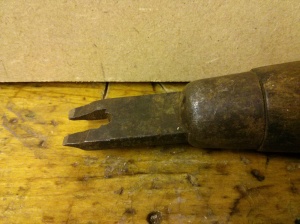 Next up was a curved spokeshave: 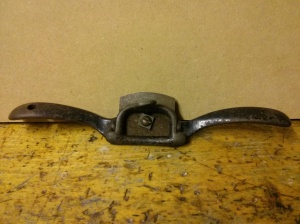 This seems to have a Record blade in it but I’m not sure whether the actual body is a Record.

I’m not convinced that square washer is original either …

My final tool purchase was a little screwdriver: 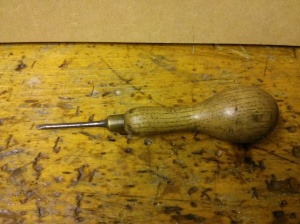 I just liked the shape and feel of the handle. I may turn this into an awl or regrind it.

As well as the tools I got:

As usual getting out of the carpark was a bit of a nightmare, but we at least discovered a way home through the backroads which bypassed most of the queue back to the A23